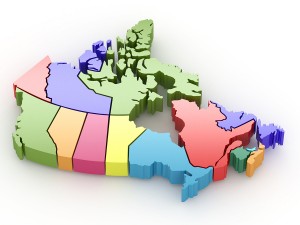 If you’ve done any reading about surrogacy in Canada, it should come as no surprise that the demand of intended parents exceeds the supply of available gestational surrogates.

We have Federal law about surrogacy in Canada, but Provincial laws governs the post-birth process. The main questions to ask when thinking about surrogacy in a different province revolve around the post birth process. Will you be recognized as the child’s parent? How does that happen? How long will it take? Are the courts friendly? Is the surrogate presumed to be the child’s mother? Will her spouse have rights? When can I travel with the baby?

Most surrogacies take place in Ontario, Alberta and British Columbia, but there are surrogacy births in other provinces.  Working in another province takes some planning, and you should get detailed answers to your questions from a professional before you take any costly steps, but here is a brief summary to get you started.

Surrogacy in Ontario works very well. The surrogacy industry is really centered in Ontario so there are many physicians, clinics, counsellors and lawyers in Ontario who specialize in or are open to surrogacy. The post birth process is also well established, and the intended parents can obtain a post birth parental order making their parentage and custody of the child official.  The birth registration happens only after the court order is obtained, so the surrogate is never registered as the child’s parent. The intention of the parties is key in Ontario, so a genetic link between the intended parent and the child is not required (but a pre-conception agreement showing who intended to be the parents is important!). That means that an intended parent, whether or not he/she is genetically linked to the child, can be recognized legally in Ontario.

British Columbia has relatively new legislation and is, as of the date of this writing, the only province in Canada that can, under certain circumstances, recognize the intended parents without a court order. The birth will be registered in the names of the intended parents if the parties entered into a formal surrogacy agreement pre-conception, the surrogate consents to the process after the child’s birth and the intended parents agree to be responsible for the child. BC law has the flexibility to recognize that a child may have more than two parents and DNA tests are not required in order to establish parentage.

Quebec law does not favour surrogacy, and the process has become unpredictable as a result. The Quebec Civil Code provides that a surrogacy agreement is null and void and cannot be enforced. Some judges have granted parental orders in Quebec, but an equal number have chosen not to  grant parental orders. As a result, intended parents who work with a surrogate in Quebec may need to proceed by way of second parent adoption. Quebec is not a surrogacy destination and most Quebec intended parents choose a surrogate who lives outside the province.

I have also been involved in surrogacies in Manitoba, Saskatchewan, Nova Scotia and New Brunswick, but surrogate births are much less common in those provinces. If you have found a surrogate in one of those provinces, call me and I’ll be happy to give you the up-to the-minute report on the latest surrogacy in that province and the post birth process.