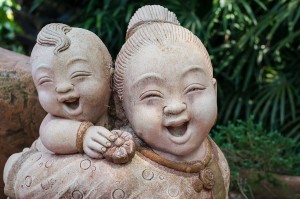 Reports have recently surfaced about a surrogacy gone wrong in Thailand. An Australian couple, reportedly using their own sperm and eggs, worked with a young surrogate in Thailand. The surrogate became pregnant with twins, a boy and a girl. Testing revealed that the baby boy had Down’s Syndrome and a heart defect.

When the twins were born, the intended parents reportedly cared for their daughter, but not their son. They took custody of their daughter and brought her back to Australia, leaving their son in hospital. He needed significant medical care but they made no medical decisions on his behalf, nor did they leave any funds to pay for his care.

Pattharamon Janbua, who has two children of her own, stepped forward to care for the child.  International fund raising has provided funds for baby Gammy’s care. Sometimes it truly takes a village to care for a child in need.

We can learn from this surrogacy story. Asking a surrogate to terminate is never an easy conversation, but it is much easier if you’ve taken the time to discuss the possibility long before the first pregnancy test. Talk about what kinds of issues would lead you to request a termination or selective reduction but don’t try to make a definitive list. You can’t predict when medical tests will reveal a problem, but you should know when it might be too late to ask for a termination.  There will be a point in time when the surrogate feels it’s too late to abort, and you should know that deadline.

If you’re thinking about international surrogacy, the case of baby Gammy clearly illustrates the unlikely, but possible, situation of having a very sick child in a foreign land. What costs are you willing or able to absorb? Is there insurance available? Are you confident in the medical care available? These are all questions that should be asked when evaluating a foreign jurisdiction. If you are a Canadian intended parent, surrogacy in Canada looks very attractive and feels so much safer.

The media love a sensational story, and news of baby Gammy is spreading quickly. Today’s headline is “it could happen in Canada” but that’s not the point. Gammy’s story is a tale of two families, one who went over and above the call to care for a child to whom they are not genetically related.  The other family made a decision that they were entitled to make but in a way that was devoid of compassion for a child they had worked so hard to create.  Remember that this case is an aberration, but we can all learn from it.

Could it happen in Canada? Of course it could, but it hasn’t. We have had thousands of surrogacy cases and not a single Canadian couple has abandoned their child. People who pursue surrogacy in foreign countries may feel less of an obligation to behave ethically and responsibly, but it doesn’t change the basic story here. This is a story of a couple who made a poor decision. It just happens to involve surrogacy.